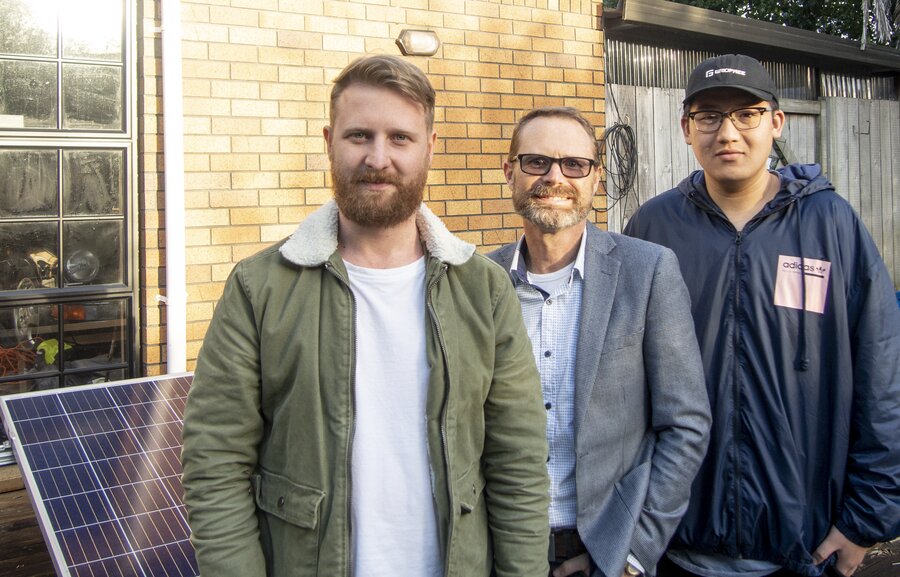 11/12/2019 Electrical engineer Ethan Simpson, co-founder of GridFree, discusses New Zealand's growing solar market, where the alternative energy market is headed and taking a gamble on importing product.
What does GridFree do?
The main focus of GridFree is off-grid solar kits - not the kind of solar that residential houses have where panels on the roof feed back power into the grid. We include batteries in our kits so people can store the power they generate and live completely self-contained, whether that's in a bach, a container home, or a housebus!
We sell small solar kits and provide all the after-sales support people need so they can set it up themselves - there are small parts that require an electrician to set up but the vast majority is fully DIY with our instructions. Our most popular kits come with four or eight panels, and can be easily installed in a day or two.
Myself, Craig Simpson and Zicheng Song founded GridFree last summer, and we're based in the Mt Wellington-Panmure area in Auckland. We've just got our own dedicated office space, which we're leasing from the storage company where we keep all our gear. Before that we were working out of our lounge, getting our product delivered to my uncle's workshop and then transporting it to our garage; which we did for about eight months. On one of our earliest days, Craig turned up to the port in Auckland city in his ute with a trailer to pick up a pallet of gear, and found himself a little intimidated in the line of big trucks hauling containers. He ended up needing to borrow a hi-vis vest from one of them! Since then we've learned a lot about how to manage a business based around importing goods from overseas, dealing with everything from miscommunications with suppliers to packing and shipping kits made up of 1mx1.6m panels and 60kg batteries.
What was the motivation for starting it?
Craig: It all started when I bought 100 acres that didn't have any power. I called Northpower and they told me it would cost somewhere between $50,000 and $90,000 to get the power on as it needed power poles and transformers. Instead, I thought what I needed to do was build an off-grid solution, and because I'm a little bit DIY I thought I'd go and buy all the parts and do it myself - but nobody wanted to help me because the whole industry is set up so that you just write out a massive cheque to somebody and they come and install it for you. It sparked the thought 'If it was hard for me, I wonder if it was hard for other people too,' and I realised there was a market out there for people with a little bit of DIY experience but who didn't know a huge amount about solar, who would do it themselves if someone could point them in the right direction.
How big is your team?
There's myself, Ethan, and I bring the electrical know-how to the team. Craig, my father, takes on the role of Chief Exec, and then we have Zed, who handles all of our logistics. He has connections in China so he knows how to talk to our suppliers and organise freight. We import all of our parts, our batteries and solar panels from China, and Zed is a vital part of that process. Rachel, my younger sister, works with us part time helping out with our marketing and social media work.

What are your plans for GridFree? Ethan: We're looking to expand internationally because we get people contacting us from all over the world, even America. We've already sold 10 kits to people in the Cook Islands, Samoa and Rarotonga. We try to create something that will cover as many people as possible, instead of the tradie approach of making something customised for every person, so as we have all the processes in place to build that we can look at marketing overseas.
The team at GridFree: Ethan Simpson, Craig Simpson, and Zicheng Song.
Australia is our next biggest target, then America. There are opportunities in other countries but there's also a lot of competition and it's kind of a race to the bottom price-wise.
Long term, we want to focus on our section of the market, which is providing quality components and complete kits for people instead of trying to move into installations.
Craig: There's massive growth in the rural sector. We've been selling mainly to people living off-grid and alternative lifestyles like tiny homes, however, lots of farmers need to run power out to a remote building or shed or put in water pumps near dams and we're getting a lot of inquiries from them, so we believe that there's really big growth in that commercial sector of rural farming.
GridFree recently had its biggest week in sales ever - tell me about that? Ethan: At the beginning of this month we got one of our largest shipments ever. We were kind of nervous about what the demand would be after putting all of that capital investment into the shipment but we were surprised at the interest. At the beginning of the month we started selling on Trade Me and our website, and we sold three Freedom kits, our biggest kit, in three days.
We weren't expecting anything like this in this in the middle of July with the weather we've had, which makes us really excited for the future to see if this momentum continues in the summer months. Craig: We've hit our projected revenue for the past few months - we will be a $1 million business, turning over $1m in sales revenue by the end of the year and we're less than 12 months old. Our first order was $40,000 worth of product, second order was $100,000 worth of product, and each investment since then has been consistent with those numbers every three to four months. We're selling on average two to three kits a week and that's propped up with people expanding their kits or buying additional components.
Did you foresee the demand for DIY solar kits and how much potential is there for this segment of the market?
We didn't expect it to grow as quickly as it has, but we knew there was something there when we were doing research to build our own solutions, because we saw heaps and heaps of people asking the same questions we were asking.
Ethan: New Zealand has more daylight hours than people expect and the efficiency of solar means it works really well in New Zealand, even in shaded conditions now.
There's a real growth in off-grid as it seems like the cost to get power connected is rising, and the cost to go on solar is decreasing. There's a real growth in demand for lifestyle blocks in New Zealand, especially in Northland, which are one of the prime candidates for off-grid alternative energy solutions.
What advice do you give to others thinking about starting their own business?
You'll know once you have a good product. When you have the right product-market fit you'll know - people will come to you.

GridFree grew out of one man’s frustration as he tried to DIY an off-grid solar system for a lifestyle block in Northland. With a $45k+ price tag to connect to the grid, overpriced kits, disinterested solar companies, and poor quality components, it took a shocking amount of effort to get even a s…